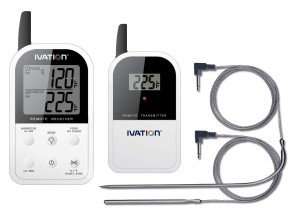 This is the Ivation Wireless Long Range Digital Thermometer I use myself. The Ivation dual probe digital wireless thermometer review will show you all the experience I have with it.

I have not tried this dual probe thermometer on the grill yet but am starting on the review by writing about what I found already.

My first test was done by just connecting the probes and turn the unit on and let the probes sit on the table and see what would happen.

After a few seconds, the unit reached the temperature of my house with no problem.

The food probe read in my opinion more accurate than the grill probe. That one was 4 degrees lower than the food probe.

The food probe was pretty accurate with the settings of my air conditioner thermostat.

The second thing I tried was to test the accuracy of the probes in water filled with ice cubes that I let sit for a few minutes to make sure the temperature should be almost 32 degrees.

I let the probes sit in the water for a few minutes to give them time to reach the right temperature.

The meat probe reached 32 degrees and then gave the error that it was reading lower than 32 degrees.

The third test I did was in the oven that was set at 225 degrees because that is the temperature I most of the time have my smoker set on. I tried to set the probes as close to each other as possible to eliminate one or the other being closer to the heating element.

My oven is not really new so I got no idea how accurate the thermostat works. This means that the oven might be set on 225 but in reality, might have a different temperature. I was only trying to find out if the difference in reading on the unit was consistent with this temperature.

During the preheating stage of the oven, both the probes stayed almost at the same temperature with the grill probe sometimes a little lower.
After this, I left the probes in the oven for about 20 minutes to see what would happen.

The grill probe stayed most of the time 2 to 4 degrees lower than the food probe.

Maybe the probes react differently to the oven cycling on and of. The food probe is thicker and longer so it might need more time to read right.

The temperature fluctuated between 210 en 255 degrees on the Ivation dual probe thermometer. At the time the oven kicked in the probes stayed basically at the same temperature with the grill probe sometimes reading a little higher and the food probe catching up later.
This could have to do with either the place I put the probes or like I mentioned earlier the thickness and length of the food probe.

Results in a table

I have to state that my test was not done under controlled circumstances of course.

The setup for the remote receiver is pretty simple and well described in the manual.
No problem connecting the receiver to the base and the data is updated about every 5 seconds.
I could not find that in the manual but I just timed it myself.

The blinking led on the front of the base unit shows when the update is sent to the receiver.

I have not tested the range if it really works up to 300 feet because my yard is not big enough and I did not feel like walking down the street.

We have read a lot of reviews on several sites and on one site, I found over 1200 reviews alone.
This shows the popularity of this dual probe digital thermometer. Here are some of the most made and most important remarks we found.

I am still reading all the reviews. My findings will be here very soon.

My own experiences are very good. I have used this wireless thermometer now for a while and have found no problems with it.
I even left the main unit outside a whole night in the rain and is still worked fine.

The accuracy I tested by using my oven makes me conclude that it is very accurate. But does it matter if we cook on 260 instead of 255 degrees? In my opinion, we are slowly getting obsessed with temperature accuracy.