From the name Hamilton Beach 25331 Super Sear 100-Square-Inch Nonstick Indoor Searing Grill, it is pretty clear that the specialty of this model is the searing power. But it is not limited to that of course. All regular food that you cook on an indoor grills can be cooked on this one also of course.

Read the rest of the Hamilton Beach 25331 Super Sear review:

It is very important to know the size and effective grill surface of a grill. The name gives it away already but it is a 100 square inches big grill. This should be big enough for 4 regular sized hamburgers jus to give you an idea of how big it is.

Material of the grates

The second most important is the material of the grill surface. The Hamilton Beach 25331 is made of non-stick material for easy cleaning. The grates are not removable and this is the case in the most indoor grill that is made to sear meat. The reason is that for these types of grills the heating element is placed in the plates. For removable plates, this would not be possible. Their heating element is placed under the plates.

Features of this indoor electric grill 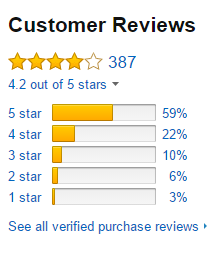 With an average of 4.2 stars but 92% 3,4 and 5 stars there are a lot of good things to tell about this indoor grill

“Love it !! The features of this has hands down beats any Foreman… Did chops last night to test !! OMG none better for indoors and they tasted like out door grill.. Searing feature is the Bomb. I hit it twice to get that professional appearance !! Cleaning was a B- but ok consider the other benefits !! Over all A- I love it and recommend for up to 2 or 3 for the meats !!! Can’t wait to start doing veggies and so much more with it…..

” I’ve used this primarily for quickly preparing meat, so haven’t explored making paninis or grilling vegetables. The nonstick coating is great, and regular use has not led to any noticeable damage yet. The cleaning instructions that come with it are decent, though instead of cleaning with the steamed paper towel, I’ve been cleaning with a cloth dish rag. While it doesn’t have some features I’d want (primarily removable grill trays) I wouldn’t expect them at this price point…..(read more : what people have to say here!)”

My opinion of the Hamilton Beach 25331 super sear 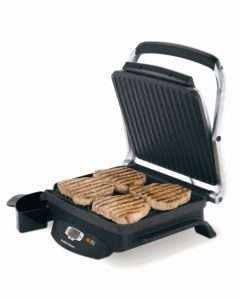 After having a look at almost 400 opinions in the Hamilton beach searing grill reviews and looking at the average rating they gave of 4.2 out of 5 stars there are a few things that we found that we like to share with you. When we looked at this grill we can recommend it as a good bang for your bucks. I can imagine that people call it the Hamilton Beach steak lover’s indoor grill after reading how many people use it to cook a steak.

We found a lot of great comments about the searing option and that it makes the nice grill marks we all like to see on our meat pretty good. Someone even called it restaurant quality.
To get this done the temperature has to be high and there are no complaints about that.

To sear the meat all you have to do is turn the grill on and set the desired temperature. The display will flash until the set temperature is reached and then will stop flashing. Now you press the SEAR button and it will heat up to about 500 degrees and you will hear a beeping sound. Place your meat on the grill and the searing will last for 90 seconds. I

I read that someone after that turned his meat 90 degrees and pushed the button again to get those nice cross hatches on this meat.

The complaint that the plates are not removable is something I found a lot. My opinion is never to put anything non-stick in the dishwasher. I have read so many times that the harsh chemicals in the dish soap ruin the non-stick surface and make it completely not usable anymore.

Best way to clean I read from someone who has used this indoor grill for a long time his way is to put a paper towel that you wet with cold water on the grill as soon as you are done cooking and let it cool. After that wipe it down with another wet paper towel and after that dry it with a dry paper towel.

The floating hinges are performing really well and adjust to the thickness of the meat or sandwich you grill very easily.

The cord seems to be a little short and that was something I read a few times. It limits you in the options where to put the grill on your counter-top. The length is 20 inches.

Not a lot of complaints about smoke. Not even on the searing option. Just that when you clean it as advised with a damp rag it will let off some steam.

This Hamilton Beach has an on/off switch and that is something we did not see a lot of other indoor grills. The power is really of and the only thing that stays on is the power light.

The temperature setting works well although there is a little bit of a learning curve in how high to set if for what you grill on it. Some raters mentioned that it gets warmer than the recommended setting and they had to turn it down a little.

More and more people are grilling their vegetables instead of boiling them. There were many people who wrote that this grill is great for grilling veggies and even with meat at the same time.

This grill is 1500 watts and to give you and here is an idea of how much it would cost you to run this grill.
1500 Watts equals 1.5 Kilowatts. The average price of electricity is 12 cents per Kilowatt in the USA. This means that you can run this grill for an hour and it will cost you roughly, 1.5 x 12 cent= 18 cents.
Since most of the time it takes about 10 minutes to cook a burger it would cost you 3 cents to cook 4 burgers.

If you would like to read the manual first to see if this is the indoor grill you need you can find it here on better grills. Click on this link ==>>Hamilton Beach 25331 manual <<==

If you still think you need a Hamilton Beach indoor electric grill with removable plates the Hamilton Beach 25360 indoor flavor searing grill would be a good option. In there are no real searing grill recipes but you can find some temperature settings and grilling time for several types of meat.

You can read all the Hamilton beach indoor grills we reviewed on the menu.