There are 2 models in the Char-Broil TRU-Infrared Gourmet 3-Burner. Model 463251713 and Model 463251714.
The model ending on 14 is the 2014 model and the one ending on 13 is the 2013 model.
They are basically the same except maybe some cosmetic differences that we will describe later.
The Gourmet series from char broil is exclusively offered at the Home Depot stores and basically, there is not much difference with the Performance series. Another option is to buy from the Char broil Website.

I have tried to find all the available information for this 3 burner grill.

Material of the grate 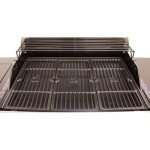 Features of this grill

“I bought this grill as a replacement for my 20 year+ old charbroil gas grill. I was intrigured by the radiant cooking technology and hoped it would offer a better grilling result than my old grill – which was great by the way – but subject to the typical hot spot issue with traditional gas grills (plus getting parts was becoming a major issue ). So far I am extremely pleased with the grilling performance. Chicken is so much more moist and tender than before and cooking a steak on it is now perfect! Set-up was easy to do (took a couple hours). This is my second season using the grill and I particularly like the easy clen up of the catch tray with the burner section staying pristine clean...”

“The first Char-Broil product I bought was the Big Easy. I can’t say enough great things about. Then when I needed a new grill, it only made sense to the an IR grill. So I happened to be in my local home improvement store and saw the Char-Broil IR series. I ended up with the Char-Broil 3 burner IR grill (Gourmet version). I am very happy with the way it cooks. Uses less gas than my last grill and very easy to clean up. Definitely recommend!!…(read more here

Pros:
The Tru infrared systems get nothing but compliments and hardly any negative comments. the ones I found most of the time admitted that they had to get used to infrared cooking because they never used it before.

The porcelain-coated cast-iron grates are according to some people top of the line and the best they ever cooked on. The self-clean settings are a big plus and make cleaning a lot easier.

I have not read many problems with flare-ups on this grill. This means that they still are there once in a while, but nothing compared to “other” grills without the infrared cooking system.

It is very easy to add wood to the infrared pan to get a smoked flavor in your meat. The 3 burners each have their own ignition spark, so worries that you have to have all burners on to fire up another one. This is a great pro in my opinion.

Cons:
Letters around the burner seem to come off after a while and there is some discoloring of the metal after a while I read a few times.

The self-cleaning settings get so hot that you have to watch them because they can catch fire.

Found some difference in opinion about the quality of the used material. Some mentioned the poor quality and others mentioned it lasted for years and years.

Summary of what we think about the grill

(Back to Top)
The Char broil infrared 3 burner gourmet gave me some headaches. While some people gave nothing but good recommendations there were a few that mentioned the poor quality and a little rust problem after about a year.

When I starting looking deeper into that issue and had a look at where the complaints came from I found out that it was most of the time in a climate with high humidity. I also found that many people think you don’t have to use a cover in that kind of climate. The letters around the knobs are fading pretty fast and that makes it a little hard on the temperature settings, but I also recommend the use of a good thermometer with every grill, because the ones that come with it are most of the time not reliable.

I always recommend a cover and cleaning after a couple of times using any grill and that seems to be the key with this grill also.
So overall I want to give this grill positive advice with the remark that it has to be kept clean and covered to ensure a longer life.

The infrared is something you have to get used to and most people love it!! Again a warning!! Be careful, because this grill can not be shipped to all states. (AK, GU, HI, PR, VI are states it can not be shipped to. the side burner has a weight limit. The manual tells us not to put any pan on there bigger than 6 quarts, which is a pretty big pot in my opinion.

Spend a little money on a quality grill cover and maybe try the rotisserie accessory.

Clean after a couple of uses. Always cover your grill to prevent rust problems. Be careful when it is in the clean setting it gets real hot and can catch fire! (This is something I read several times on forums and in reviews)

You can read all our Char Broil TRU infrared grill reviews by going to the menu at the top.