When I did the Char Broil Patio Bistro 240 review I had a good look at this electric grill and I found that it basically is the same grill as the Char Broil 180 I also reviewed.

With an effective grill area of 240 square inches and 80 square inches raised secondary area, it is not the largest grill, but still large enough to grill for multiple people at the same time.

Material of the grate

This comes with a porcelain coated cooking grate. I have not yet found out what the material was underneath the porcelain coating, but with the good reputation of the char broil company, I guess it is steel, but I will do more research and add it here.

“Plugged it in, turned up the power, and WOW! This sucker was up over 550 degrees in about ten minutes. As I’d done before, put a small handful of hickory chips into a foil pouch, poked a few holes in it, and tossed it on the grill and closed the lid…”

“The Patio Bistro does its intended purpose. I like this grill the more I use it. It gets, hot, is easy to clean, and has a nice large cooking area…”(read more here Patio bistro reviews: here)”

After doing all my research about the char broil bistro and seeing it is getting a rating of 3.9 out of 5, this char broil electric grill can be called a pretty good deal.

Many of the people who took the time to comment on this electric grill are pretty happy with it.

One of the most named pros is the fast heat-up time and the fact that you can still add some wood-chips in a piece of foil to get that nice wood taste that many people like.

The grill comes in a box and contains the grill that needs some assembly.

The removable controller that can be stored inside will probably make this part last longer than when left plugged in and outside.

There were some remarks in the reviews about the assembly of the char broil patio electric grill, but it seems to me that it was not a big problem for most people.

Like in any product review you find people who are not satisfied with the product or receive a faulty product.
With a 90 day warranty, you must be able to return it in that case>.

In one or two reviews I found that the temperature control does not do too much on the lower settings, but another review mentioned that he was able to maintain a nice low temperature to keep his food warm.

The Char Broil patio grill is like the name already mentions, a grill designed to use on a small patio or balcony.

That however does not mean that you can not use it anywhere else. It is our opinion that this is a great grill for people who do not grill large pieces of meat or for a large group of people.

If you are looking for a nice grill to cook some great food for yourself or for when you have a company we think we can recommend this grill for you.

One of the things I like is that all parts can be bought as replacement parts. This means that if a part ever goes out you do not have to replace the whole grill but just can order the part at the char-broil website for an affordable price.

The removable controller is in my opinion a big plus. it is probably the most important part of electronics and it’s better to store it inside.

The cost of using this electric grill is very affordable.
With its 1500 and 1750 Watts and an average price of electricity of 12 cents per Kilowatt. (1000 Watts) it would cost about 19 – 21 cents an hour to run these grills. 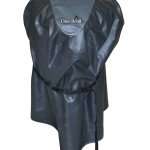 The best protection of your Grill will be the use of the right cover.
There is a cover special made for this char broil grill. We highly recommend adding this to your purchase to protect your grill.

Click here for the==> patio bistro grill cover review on our site.

For more electric grill reviews you can go to the menu.